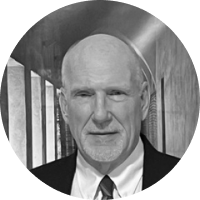 Ed joined the financial industry in 1979 after attending the University of Notre Dame (BA) and Loyola University of Chicago (MBA). He spent the early years of his career participating in the founding of the Chicago financial futures industry as a clearing lender, currency trader and floor manager.

In 1993 Ed moved with his family to London to head up JP Morgan's team at the London Financial Futures Exchange (LIFFE) and later as Managing Director of Credit Suisse’s European Listed Derivatives desk.

He is a past member of the Chicago Mercantile Exchange, Chicago Board of Trade, LIFFE and EUREX. While in London, Ed held the 17, 24 and 65 qualifications and after returning to the US in 2008, became a Registered Investment Advisor in the state of New Jersey. He currently holds the FINRA series 7 and continues asCEO of Cenacle Partners LLC.

Ed lives in Mahwah, NJ with his wife Margaret and two of their six children. Four older children are married with 20 grandchildren, at last count.